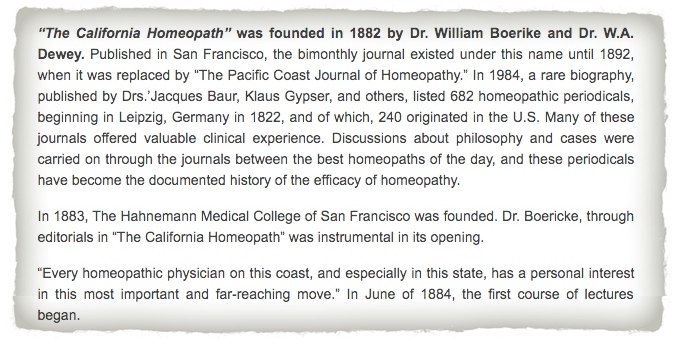 “The California Homeopath” was founded in 1882 by Dr. William Boerike and Dr. W.A. Dewey. Published in San Francisco, the bimonthly journal existed under this name until 1892, when it was replaced by “The Pacific Coast Journal of Homeopathy.” In 1984, a rare biography, published by Drs.’Jacques Baur, Klaus Gypser, and others, listed 682 homeopathic periodicals, beginning in Leipzig, Germany in 1822, and of which, 240 originated in the U.S. Many of these journals offered valuable clinical experience. Discussions about philosophy and cases were carried on through the journals between the best homeopaths of the day, and these periodicals have become the documented history of the efficacy of homeopathy.

In 1883, The Hahnemann Medical College of San Francisco was founded. Dr. Boericke, through editorials in “The California Homeopath” was instrumental in its opening.

“Every homeopathic physician on this coast, and especially in this state, has a personal interest in this most important and far-reaching move.” In June of 1884, the first course of lectures began.

“We believe that we have such a principle in the law of similia, and just so long as we are faithful to it and in our teachings uphold only the best and truest interpretations of the law…… just so long as we teach homeopathy as an inductive science in the spirit of Hahnemann, Hering and Dunham-……. we have a right to our separate existence……that if we give up its teachings and practice….(give up) the purity of the homeopathic method…it becomes eclectic merely, and with it forfeits its right to a separate existence.”

In the words of Constantine Hering, “If our school gives up the strict inductive method of Hahnemann we are lost and deserve only to be mentioned as a caricature in the history of medicine.”

Homeopathy struggled then as it does now, to maintain its own laws and recognition, “a separate existence.” Legally it does so with the existence of the Homeopathic Pharmacopoeia. A continuous publication since 1897, it received a big boost politically in 1938 when federal legislation created the Food, Drug and Cosmetic Act. Thanks to the tireless work of Dr. Royal Copeland, homeopathic doctor and fortunately, U.S. Senator, the Homeopathic Pharmacopoeia was added on with the main legislation he proposed, a bill to create the Food and Drug Administration. It took five years for Congress to finally pass the bill, five days after the death of the homeopathic senator who had been the main force behind the formation of the FDA. It is the legal recognition of homeopathic medicine and the homeopathic pharmacopoeia that has helped keep homeopathy from being a “caricature in the history of medicine,” at least in the U.S. Now let us not forget to honor Hering’s other demand to not give up the “strict inductive method of Hahnemann.”

“The California Homeopath,” under the auspices of Dr. Boericke, was an effort to unite homeopaths on the west coast. The journal was a powerful instrument, especially in its support of the homeopathic hospital, and we hope that today we may humbly offer a reliable voice to the homeopath.
The Editor

Editions of the Journal:

April 2006. The Phoenix Rises: How Homeopathy Continues to Survive & Thrive

December 2006. The Pure Science and Art of Homeopathy: A Study of Proving Methodology

March 2008. Miasms: Mere Theory or a Revolutionary Method of Analysis?

Sept. 2009. Why Don’t Materialists Like Us? The Political & Philosophical Identity of Homeopathy

January 2010. How to Learn, How to Teach: Exploring Homeopathic Education

March 2011. Homeopathy Works: A View from Around the Globe

March 2012. The Homeopathic Treatment of Lyme Disease: Possibilities and Challenges

December 2012. Homeopathy in Africa, Part One

January 2014. The Future of Food: What Should We Be Eating?

January 2015. Ways of Seeing: How We Perceive What Needs To Be Cured

May 2016: Scientific Research on Homeopathy