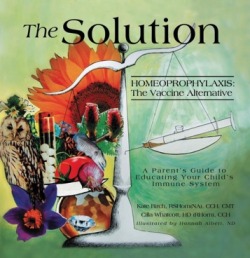 The bulk of this short article is an excerpt from The Solution ~ Homeoprophylaxis the Vaccine Alternative, written by Kate Birch and Cilla Whatcott. The basic premise of all holistic thinking is that we do not exist in isolation and that all things have a purpose in the grand scheme of things. The idea that humans have in thinking that they can eradicate disease by the use of vaccines and antibiotics is irrational and implausible. For as long as there are imbalances in the way humans live in their bodies and the way they live on this planet there will always be the need for infectious disease to help set us straight.
In Homeopathy we know that the acute infectious process is what liberates chronic disease and the acute childhood diseases, such as whopping cough, chickenpox and measles work to either liberate the child from the inherited encumbrances of their parent’s chronic disease patterns or to initiate immunological pathways that the possibility of enhancing development. These are called childhood disease as they are intended to be contracted in childhood. By denying this outlet for disease expression with vaccines and suppressive medications we are in essence ensuring that chronic disease will compound through the generations. What is needed in any infectious disease prevention program is the understanding that disease is actually a benevolent process and that the best form of prevention is to begin to look at why a disease has come at this time in the person or group of people. The next step is to administer an immunological education program so as to capture the benefits of the disease without the attended risks of the disease or of the method that attempts to do so.

Rather than calling out disease as the big bad ugly monster, which it is portrayed to be by the media and the global disease eradication programs, we must assess the conditions that are conducive to producing disease in the first place, and then find ways to help the individual or group of people to overcome these limitations through social, political and cultural programs designed to ease the conflict arising from disease producing environs. It is only from this place of orientation that we can begin to address the true purpose of disease and begin to make an impact on the health of humanity.

The gift of Homeoprophylaxis (HP) is not so much that it is a disease eradication program but rather its purpose is to help strengthening the individual’s relationship towards these bacteria and viruses and so instructing the immune system how to maintain harmony with the world in which we live. With HP it is possible to view the prevention process as more stepping into the disease process so as to get some immunological experience of the bacteria or virus in such a mild dose as to temper and rehearse the normal immune system response towards that entity. In this way we not only come into greater balance within ourselves but are also more adept at living on this world.

From The Solution, Chapters Two and Four: Humans, Pathogens and Their Interaction

Bacteria and viruses have evolved over time in relationship with humans. They have come and gone in epidemics and scourges based on collective susceptibilities in those human populations. They have shaped cultures, religious behaviors and rituals throughout history.

They have served as checks and balances in the human population based upon human frailties and errors of living. The action of these living entities can be seen as pressure release valves for situations and environments not conducive to sustaining human life, either for the individual or the larger population. Those with poor nutrition, living in over-crowded or unsanitary conditions, or those under certain political and social pressures have a much greater susceptibility to contracting disease. The weak, the old, and the young, are at greater risk of complications in these disease processes.

While it is not the bacteria or virus that directly causes the complication, it is the reaction, or lack of reaction of the human body to the pathogen that dictates the course the disease will follow. How high the fever goes, how violent the purgative process is, etc., governs how an individual will fare through an illness.

Those who contract the disease and display a moderate symptom picture, survive the process, and are often gifted with life-long immunity, greater freedom from chronic disease, and greater developmental maturity. This is because the disease process has stimulated further development of their immune system.

Historically, there has never been any reliable system of medicine that supports this disease process. Rather, avoidance of disease was necessary to limit severe disease outbreaks.

However, the human immune system is well equipped to recognize and develop appropriate immune system responses to naturally occurring pathogens.

The holistic view of disease observes that when the environment of the individual is mal-tuned, then, and only then, will the person become sick. This mal-tuned internal environment then opens the door for opportunistic infections.

While the conventional approach is to destroy all potential pathogens and use vaccinations to avoid any pathological process, the holistic approach is to strengthen the individual, to make him less susceptible to getting sick. Then, if sickness does occur, to help the immune system to make the sufficient and required action to remove the bacteria or virus.

Scientific advances, through the use of antibiotics or genetically modified viral vaccines, have given us a false belief that we can, or have, eradicated certain disease processes. While vaccination may eliminate the pathogenesis of a particular antigen, and antibiotics may kill some bacteria, we must remember these entities are living and have their own imperative to survive.

As humans have changed the evolutionary course and form of viruses and bacteria, viral strains have mutated and bacteria have become ‘super bugs.’ Disease continues on. Advancements in sanitary practices, clean water and food, better nutritional status and living conditions have all made the greatest impact in reducing disease incidence .

Neither the use of antibiotics or vaccines has improved the immunological process of the individual; we have not solved the problem of susceptibility, nor have we given credence to the need for the disease process.

Health is Measured by
• One’s ability to adapt to the external pressures of life and the environment
• One’s ability to bring physical action into the external environment to create a living situation that is conducive to life and health: socially, spiritually, culturally, politically, and economically
Disease is Influenced by
• The limitations of a particular environment supporting particular aspects of human life
• The virulence of the antigen in comparison with the reactive mechanism of the person

Overexposure to heat, cold, lack of sleep, lack of nourishment or shelter, overcrowding and poverty, all increase susceptibility toward infectious contagious disease processes.

Rather than seeing pathogens as responsible for the disease process, one can say the pathogen survives as a result of conditions which are conducive to that disease process.

An individual succumbs to an acute viral or bacterial illness because of various factors that in combination increase the susceptibility of the person to contract that disease entity.

A disease becomes contagious either by its virulence or its existence in a population that shares the same physical, social, religious, cultural, political, or economic susceptibilities.

If the person or group of people develops immunity and survives through the illness, we can say that a level of susceptibility in this individual or group was satisfied by the illness.

In the largest sense, as we know some people are stronger and possess greater biological conviction after an acute process – we can say that the infectious process acted as a tonifier and liberator of something deeper in the individual’s health.

The normal process of developing a fever and a discharge liberates the body of toxins. The liberation of those toxins transforms the relationship of the individual(s) to their external environment. This natural exonerative process results in specific immunity which, for some diseases is life-long.

The pathogens implicated in this process could be considered symbiotic towards maintaining the health of the individual as long as the body’s reaction to the pathogen is not so violent as to kill itself in the process.

In contrast to the allopathic approach of fighting against the body’s natural defense mechanism by suppressing fevers, the homeopathic method works towards understanding the meaning and purpose of the symptoms and facilitating this self-correcting mechanism so that the pathogen is eliminated and harmony is restored to the body.

Not all people at all times will succumb to an acute infectious process. Susceptibility is based on two factors: the inherent health of the individual and the virulence of the pathogen. If the susceptibility to acute disease is left unaddressed, or suppressed by inappropriate treatment, it will always find a different way to express itself.

Those with weak vitality will produce insufficient fever or eliminatory processes leaving them susceptible to prolonged illness. Those with a strong vitality can produce overly intense symptoms causing excess suffering, also putting the person at risk.

Theory and Method of HP

Homeoprophylaxis satisfies the process of naturally acquired disease by providing a tiny dose of the disease, but without any of the risks. This is done through the use of remedies called “nosodes.”

Nosodes are given orally, one disease at a time and work to stimulate general immunity. The immunity engendered is much like the immunity of naturally acquired disease. HP is administered through the sequential dosing of a specific nosode over several months or years.

To “attenuate” means to make something smaller or weaker. In electronics, reducing the amplification of a signal without distorting it is known as attenuation. A fever can be attenuated, or reduced, by cool bathing. A virus or bacteria can be attenuated by a variety of methods. Homeopathic nosodes, are attenuated through a careful process called “potentization.”

All material, biological and otherwise, possesses a unique energetic signature, or frequency. Diluted preparations of disease agents have been shown to emit the same energetic frequency as the original disease agent. This frequency is sufficient to stimulate general immune system function.

Because all homeopathic remedies are potentized, the original culture or specimen can be infinitely reproduced from this one original source.

Nosodes are made without additives, adjuvants (chemicals intended to increase the action of vaccines), or preservatives. Nor are they incubated on any animal or human fetal tissue. Nosodes are administered orally, one at a time. By touching upon the mucous membranes of the mouth, the body’s first line of defense, they stimulate the normal order of immune system function.