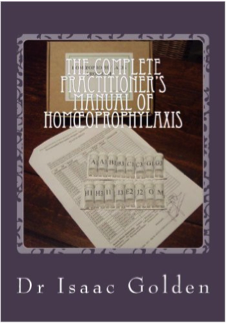 Isaac got started on his HP journey after a vaccine damaged one of his own children. He believes that people of any age can embark upon an HP program. He is an Honorary Research Fellow in the Faculty of Science at The Federation University of Australia. He and his associates have taken over an existing political party, The Health Australia Party; they want natural medicine to have a voice at the seat of power. We learnt that all forms of natural medicine have been attacked in Australia. Isaac has been involved with HP since 1985 and his aim has been to find a direct alternative to vaccination. He developed his work into long-term prevention and short-term prevention protocols. Here is Isaac’s definition of HP, one that he maintains is based upon classical principles:

“Homeoprophylaxis is the systematic use of potentized substances to prevent the development of the characteristic symptoms of targeted infectious diseases.” He continues to say “we are priming the immune system to render the disease asymptomatic which is good. The substances must be selected according to the law of similars and administered according to the law of the minimum dose.”

Isaac gave examples of Hahnemann’s use of Belladonna to treat and prevent scarlet fever also Lathyrus Sativus for Polio, together with Hahnemann’s proving of China, which can be used as a prophylactic remedy for malaria. Hahnemann had said that prevention is far superior compared to waiting for someone to get sick and then having to treat them. Isaac talked about how HP can be administered in a number of ways either as nosodes or by finding the genus epidemicus remedies and by the use of a single remedy or by a combination/ series of remedies.

Many examples were given relating to the use of HP in epidemic outbreaks, scarlet fever, smallpox, meningitis etc. Polychrest remedies were mentioned a number of times and a good polychrest is often the answer.

Isaac’s Homeoprophylaxis study (1985 – 2004) shows a repetition of results. He claimed that HP has a history of great consistency, in fact around the 90 % mark, for any disease in any country. HP is really an untapped potential. There is a lot of research coming out of India. In 2014 the Prime Minister of India raised natural medicines to be on a par with pharmaceuticals.

When we look at epidemic situations, compared to vaccination, HP is 1/ 20th of the cost. Flexibility is of course an incredible advantage. Most vaccines take 6 – 12 months to develop.
The strain of the disease can change, and vaccines have to be changed to keep up with this mutation. We see this in the whooping cough; the strain has altered so now the vaccine has to be changed. Our remedies are made on the principle of similarity to symptom presentation, which is not strain specific but rather is common to how the body responds to that disease, and does not have to be exactly the perfect match which is a big advantage. The principle of similarly gives us enormous flexibility as homeopaths. Isaac went onto to discuss short-term epidemic data from Brazil and India, regional and national interventions in Cuba and India.

In his long term study, Isaac looked at four groups: those who were vaccinated, those using constitutional homeopathy, those using HP and those using nothing at all. He expected the constitutional homeopathy group would be in better health. The vaccinated group had 14 times more asthma compared to the HP group. It was in fact the HP group that were marginally healthier compared to those in the constitutional group. His work is based upon the proving philosophy – if you conduct beneficial provings it will help to stimulate the immune system and HP is like a proving.

Below is Isaac Golden’s Protocol for long term exposure and one upon which Free and Healthy Children International (FHCi) base their dosing schedule:
(The FHCI schedule gives 8 nosodes: Pertussin, Pneumoccinum, Polio, Haemophilus, Meningoccinum, Tetanus Toxin, Parotidinum, Morbillinum: Goldens current schedule has 5 diseases. He has omitted Polio (Lathyrus), Parotidinum and Morbillinum. (Golden does not include Morbillinum due to the belief that it is a mild disease in healthy children and they should get it as it provides live long immunity. FHCi has it in their schedule as measles is a political issue and to not have it would bring ridicule to the program for being insufficient).

In 2001 Isaac went to triple doses because of a failure in his original protocol. A whole lot of children got the whooping cough and the failures were in children who were only given one dose of the prophylactic remedy so he decided to use the schedule as just previously outlined.

Isaac wants people with limited financial means to use his program so he uses only two potencies – 200 C and 10 M. He warned that not everyone who has circulating antibodies is immune to the disease and this is important to consider. When children are still nursing he advises that mothers should not give the feed directly after the dose as it could antidote the remedy, one must wait a while.

When considering using HP for a variety of diseases for long-term prevention one should keep the doses at approximately ONE month apart. However, if the practitioner really wants someone to catch up then they could possibly give the dose every three weeks. When using HP for short- term diseases he advised to keep the dose repetition to within a few days.

Isaac mentioned that in India RAECC was started in 2004 to combat epidemics in the country (Rapid Action Epidemic Control Cell.) As soon as an infectious disease appears in a cell action is taken, it is analyzed and the genus epidemics remedy /remedies are identified. They do not use nosodes so much in India and this has to do with the availability of nosodes. In order to be licensed by the Indian government, a proving of the nosodes must be undertaken. So far most nosodes have not had such official provings.

2004 – HP for Hepatitis A was first used in Cuba in a small intervention. This was done with Phosphorus. Dr. Campa of the Finlay Institute was previously aware of the use of HP in Brazil and decided to make a small test against Hep A in school children. They had 100% success rate and eliminated Hepatitis A from the schools with a few rounds of Phosphorus.
2006 – Dengue Fever. There was a small HP intervention using genus epidemicus remedies and these were tested from 2006 in families of infected patients.
2007 – Leptospirosis, a waterborne disease. Dr. Bracho appointed Dr. Campa to oversee HP in Cuba. Over 2.3 million residents were given two doses of a 200C of the Leptorpisosis nosode that year and in 2008 a 10M was given.
2010 – H1N1 world epidemic: 9.8 million were given HP against H1N1. Not a single case developed in Cuba. The problem with this study is, as Cuba in an Island with minimal international migration, it is not possible to know if there would not have been any cases as there was not a control group on the island.
2010 – Pneumococcal Disease.
2013 and 2014 – Cholera (in reference to lateral spread from the earthquake in Haiti).

We were all saddened to hear that earlier this year the Cuban Government reverted the Finlay Institute back to producing vaccines only. The government has made a separate branch of its health ministry to oversee homeopathic and herbal products and further research in Homeopathic prevention continues. As the Finlay institute is a WHO licensed vaccine manufacture research in HP has drawn in the skeptics putting the economic pressure against Cuba to maintain their position in vaccine manufacturing for the international market.
http://www.homstudy.net/Education/