HOW THE IMMUNE SYSTEM WORKS 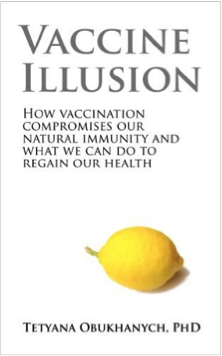 Dr. Tetyana announced that our weakest link to health in our body is imbalance in our immune system. We learnt that there are two branches, the innate branch producing INTERFERON for the containment of viral infection through a fever and localization and discharge with the help of its crucial partners vitamins A and C, and the adaptive branch designed to clean up viral infection with T-Killer cells that make antibodies. These two branches must work together. Vaccines tend to overwork the adaptive branch without stimulating the innate branch, or if Tylenol is given at the time of vaccination the innate branch of the immune system is suppressed, thus furthering the potential for immunological imbalance.

We were told that our society has a great fear of viruses and how the public health agenda is to eradicate all these viruses on earth, a war like strategy. She presented a very thorough overview of the immune system and its intricate workings and the important notion that naturally acquired infections are much better at mobilizing antibodies than vaccine-induction.

We learnt that viruses are genetically programmed to make more copies by utilizing the host’s cellular replication apparatus. Approx. 90 – 95 % of all poliovirus infections are actually asymptomatic. People could have Ebola without manifesting symptoms. A small 1996 study in Gabon indicated this. And what about the flu? Apparently 75% of people go through flu without symptoms; a study published in “The Lancet” in 2014 showed this. Vitamin D has been shown in a trial to be 42% effective in schoolchildren to prevent seasonal flu. Another trial showed the favorable effects of probiotics on cold and influenza like symptoms and the incidence/duration of flu in children.

Dr. Tetyana also taught us that elimination of virally infected cells must happen with the innate part of our immune system. These cells have to be expectorated through the discharge and she gave the example of the measles virus, which when combined with the antigen comes out on the skin as a rash – a viral rash is a good thing we need the rash in the body as it shows that the infected dead cells and antibody-antigen complex are actually coming out of the body.